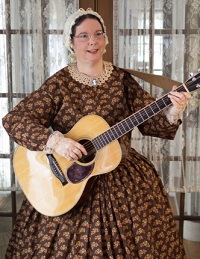 "[Music has] done more than a hundred generals and a thousand orators."
-- Abraham Lincoln

"I don't think we could have an army without music."
-- Robert E. Lee

The power of "home" lay at the heart of the Civil War and helps explain the various ways Americans responded to the conflict. For every stereotype, there were many exceptions. Here, Diane explores fascinating people and events through the songs heard by everyone from the lowliest field hand to the President of the United States. The music reflects the diversity of people from all walks of life as they struggled through a dark yet inspiring time.

Diane performs in a home-sewn 1850s gown and accompanies herself on guitar and lap dulcimer. Many of the songs are ideal for singing along.

Music was everywhere during the 1800s. Sentimental songs of home and family abounded, along with irreverent ditties. Before radio and other communications, drum beats and bugle calls directed troops on the battlefield -- the Union army had 32,000 drums! -- and most regiments had their own bands. Sometimes bands were ordered to play during a battle to rally the troops. On occasion, in the evening before a battle, the bands would engage in a musical contest, as the two armies waited for dawn to begin the attack. The sides would alternate playing favorites, then play a final song together -- Home, Sweet Home.

Composers churned out songs to raise morale and encourage enlistments. Just two days after the conflict began, George Root wrote The First Gun Is Fired. Root would go on to write some 35 wartime songs. Abraham Lincoln wrote to him, "You have done more than a hundred generals and a thousand orators." Lincoln loved music and was fond of minstrel shows and other entertainments. At concerts, he frequently requested La Marseillaise, Yankee Doodle, and Dixie.

When a new regiment arrived in Washington, it hoped to parade down Pennsylvania Avenue to the beat of its band, for review by the president. Lincoln aide William Stoddard noted "in the spring of 1861 you could go up any street, past almost any house, and from the open windows you could hear the unwearied piano, in tune or out of tune, digging away at Maryland, My Maryland, The Bonny Blue Flag, or Dixie, until the day when the Twelfth New York marched down Pennsylvania Avenue with a full brass band, expressing the wish of the regiment that they were 'in Dixie.' "

- Dixie's Land, probably written by Daniel Emmett, a northerner from Ohio. Emmet said he learned the song from the Snowdens, a family of free black entertainers. Emmett's minstrel show debuted the song in New York City in 1859, and its popularity spread rapidly. It became the unofficial anthem of the Confederate States of America, despite its creation in the North. It never lost popularity with Union troops, who marched to it often, and it was one of Lincoln's favorites. When he heard of Lee's surrender, he asked the military band to play Dixie. He said, "That tune is now Federal property and it is good to show the rebels that, with us in power, they will be free to hear it again."

- The Battle Cry of Freedom, another George Root favorite, perfect for singing along.

- The Battle Hymn of the Republic, Julia Ward Howe's 1862 anthem, elevated the struggle to a moral crusade, inspiring troops to face death for the cause of freedom.

- The Blue-Tailed Fly, one of Lincoln's favorites, in which a slave unexpectedly wins a round. Abe called it "that buzzing song" and played it on his harmonica.

- Goober Peas, a popular Southern ditty making light of the South's short rations. Soldiers were often reduced to dining on only a handful of peanuts, known as goober peas.

- Sixty-Three is the Jubilee, a supremely joyful celebration of the 1863 Emancipation Proclamation.

- Tenting Tonight, a poignant 1864 song by Walter Kittredge expressing the soldiers' longing for home and peace.

- Home, Sweet Home, enjoyed by both sides, who could agree that "there's no place like home."

"Your scholarship is amazing, your presentation was sparkly and entertaining, and your voice was strong and beautiful."

"Thank you so much for one of the best programs we have ever had. Your narration about the songs was priceless, and your lovely voice a treat."

"I knew ... we would have an enjoyable evening of music. I did not realize that we would be treated to an absolutely wonderful history lesson, delivered with a teaspoon of sugar that made it go down with ease. It was an incredible evening. We all appreciated your taking us back in time." 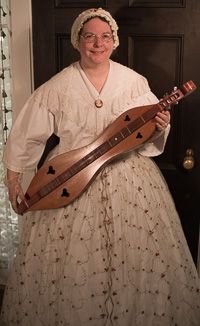