Songs of the Sea

Rousing chanteys, thrilling ballads, and maritime lore make for a joyous evening. Diane explores life on the bounding main, when men and a surprising number of women went to sea to earn a living, seek adventure, and discover the world.

Chanteys, or work songs, tell us a great deal about how a huge sailing ship was run by muscle power alone. Sailors had to pool their strength and coordinate their efforts to raise tons of canvas and anchor, and endure long turns at the pumps. Our language is still full of nautical terms, and the pull of the sea remains strong. There will be much singing along!

Diane's songs tell of tragic shipwrecks, the surprisingly businesslike and democratic world of pirates, and encounters with such wonders of the deep as mermaids and sea-serpents. She recounts the lives of women who sailed with their sea-captain husbands on merchant ships known as hen frigates when such a lady was aboard.

Chanteys and sea songs reflected the coarse language of your average sailor. The Victorians tidied them up, creating the tamer versions known to schoolchildren, but Diane delights in presenting these songs in their original form, warts and all, with all their salty energy intact. For the brave, she can include some rather bracing material, or she can remain appropriate for any type of audience.

- Cape Cod Girls, fun for all.

- Haul on the Bowlin', one of the very oldest chanteys, made for pulling in the thick rope holding the ship to the dock.

- The Big Bow Wow, full of complaints about the ship, the weather, the food, the skipper, etc., etc.

- The Wreck of the Caspian, Diane's riveting true tale of an 1857 shipwreck off the Florida Keys, and the little dog who amazingly saves the day.

- Captain Kidd, a favorite cautionary tale for centuries. Try not to wind up in rotting in a gibbet at the mouth of the harbor!

- The Sea-Serpent of Cape Ann. Yes, there was a New England version of the Loch Ness monster, seen for centuries off the coast of Gloucester. Diane's chantey, ideal for singing along, tells the creature's story and speculates as to why he (she?) has not been spotted recently.

- Lady Franklin's Lament, in the voice of Lord Franklin's wife, desperately sending expeditions to seek her husband and his two lost shiploads of men, who disappeared in a quest to find the Northwest Passage in 1845.

- Baltimore Whores, a very funny but very frank song in the voice of ladies of the evening. Entirely optional, depending on the situation.

- Leave Her, Johnny, traditionally the last song sung as a ship came into port, bidding a not-so-fond farewell to the captain, the cook, and the storms and hardships of the voyage.

Fees vary with travel distance and length of program, which is adaptable. 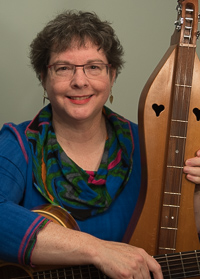