A Free Woman: The Amazing Grace of Mum Bet

In 1781, during the American Revolution, a slave named Bet sued for her freedom in a court of law in Great Barrington, Massachusetts. She won her case and chose a new name: Elizabeth Freeman. When she died in 1829 she owned her own house and left an estate worth over $1,000 to her daughter, grandchildren, and great-grandchildren. Her fierce desire to be a free woman led her on a path that illuminates the experiences of women in the early days of our country.

Bet became governess for the children of the lawyer who had represented her, and she was called "Mum" as a term of respect. She ran the household and was also a midwife and healer, earning the abiding love of her community.

The epitaph on her gravestone gives an indication of her character: "ELIZABETH FREEMAN, known by the name of MUMBET, died Dec. 28, 1829. Her supposed age was 85 Years. She was born a slave and remained a slave for nearly 30 years. She could neither read nor write, yet in her own sphere she had no superior or equal. She neither wasted time nor property. She never violated a trust, nor failed to perform a duty. In every situation of domestic trial, she was the most efficient helper and the tenderest friend. Good mother, farewell."

Diane explores those "situations of domestic trial" in the music of the time. She performs in the sort of clothing Elizabeth wore, and accompanies her singing on lap dulcimer and an instrument similar to the English guitar played by women in the 1700s.

- Swing Low, Sweet Chariot, in Bet's time a slave song with double meanings, more about reaching freedom in the North than getting to heaven.

- Amazing Grace, with one of its several original melodies, a hymn Bet probably sang in church.

- How Firm a Foundation, another hymn of Bet's time, still popular today.

- Wade in the Water, another slave song with instructions on how to use streams to avoid leaving a trail for the bloodhounds to follow.

- Johnny Has Gone for a Soldier, a haunting lament for a lost love. Bet's husband may have fought in the Revolutionary War and never returned.

"Thank you for your beautiful performance at the Bidwell House! You were even better than last year, which was a tough act to beat. I heard from every person how much they enjoyed the afternoon and how the combination of your storytelling and explanations and then your beautiful voice singing the songs was just perfect.
Please come back again!" 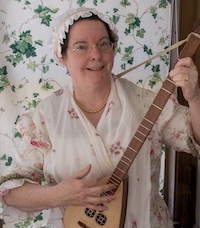